Home Trending Crypto news Fear, politics and the dollar: 5 things to watch in Bitcoin this...

U.S. dollar strength combines with a decision on monetary policy in Europe as a backdrop to fresh fear among Bitcoin investors.

Bitcoin (BTC) continues to test $10,000 support after a weekend in which it consolidated after a major drop — what next?

Cointelegraph takes a look at the major factors set to influence BTC price action in the coming week.

The weekend failed to trigger a significant bounce, with $9,900 seeing several more tests before Bitcoin drifted back into five figures.

What changed on Friday was one macro factor — the U.S. dollar currency index (DXY), which began rising after hitting two-year lows.

DXY measures USD against a basket of U.S. trading partner currencies. A week previously, an inflation announcement from the Federal Reserve had a bearish impact on the index, but last week saw a reversal in its fortunes — at the expense of safe havens.

At publication time on Sep. 7, DXY was at 92.95, having risen as high as 93.25 over the weekend. For RT host Max Keiser, fresh losses need to appear for Bitcoin to gain — the inverse correlation between the cryptocurrency and DXY should continue.

“We need the DXY to drop through 80 to get the real fireworks going in #Bitcoin and Gold,” he tweeted.

Keiser added that developments in the ongoing Brexit saga could also prove a positive influence for BTC next month. Should the European Union adopt a hardline stance with the United Kingdom, the euro could benefit and pressure DXY.

“Hopefully the EU cuts (the U.K.) off in October, freeing the Euro to trade higher. This will help Bitcoin a lot,” he wrote. 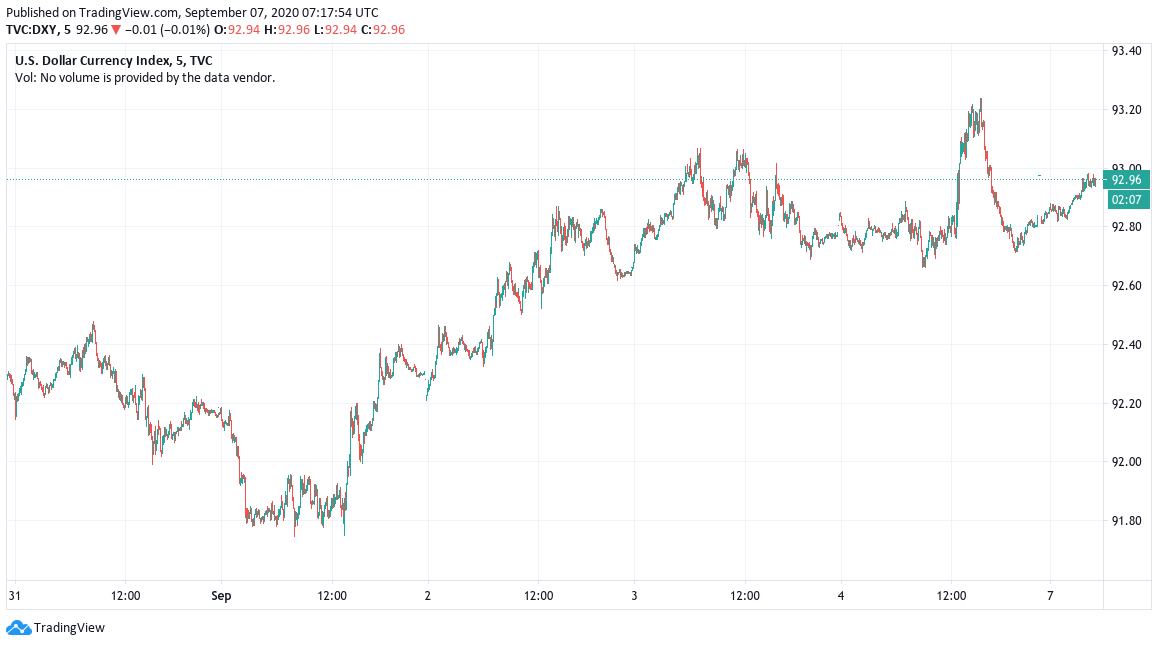 On the topic of geopolitics, multiple events this week may serve to steer markets, with Bitcoin reacting in step.

In addition to preparations for Brexit talks failing, the EU will eye economic policy as the European Central Bank (ECB) meets to discuss its options.

As Cointelegraph noted, deflation has returned to the ECB’s sphere of influence for the first time since 2016. Now, the focus will turn to whether copying the U.S. approach is suitable for the eurozone.

As Bloomberg reported on Monday, the overall global recovery from the March coronavirus crash, once robust, is now fizzling.

“High-frequency data paints a picture of a rapid rebound in the second quarter, and a stall - with activity still well short of pre-virus levels - in the third,” the publication’s chief economist, Tom Orlik, commented.

To return to “pre-virus normality,” he added, all that would work is a coronavirus vaccine.

This weekend delivered on a classic Bitcoin price trigger which could see short-term upside reenter the picture.

The resulting “gap” in the market provides likely room for an uptick from current levels of $10,100 — if Bitcoin follows historical behavioral patterns, the void should not last long.

The original dip below $10,000 gave rise to hopes that the only gap disobeying the rule — at $9,700 — would get filled. For Cointelegraph Markets analyst Michaël van de Poppe, $10,000 must disintegrate to make that possible. 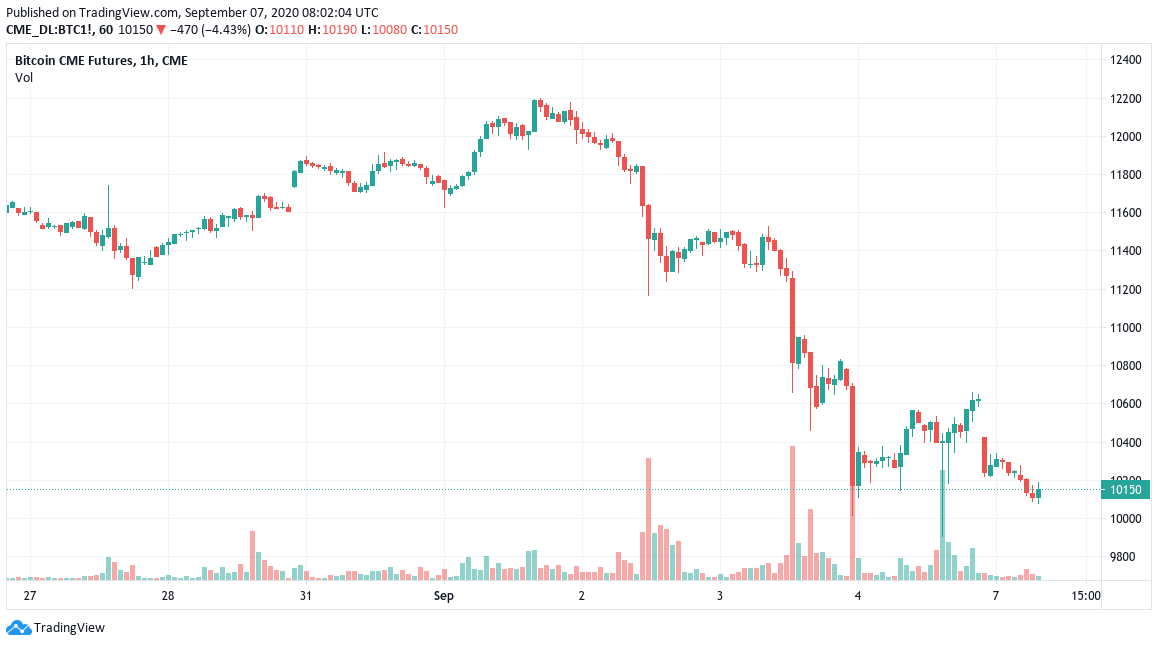 Fundamentals see only a modest fall

Bitcoin’s network fundamentals look set to take a break this week as miners take stock of the price declines.

According to data from on-chain monitoring resources BTC.com and Blockchain, difficulty and hash rate are set to come off near all-time highs.

The next automatic difficulty adjustment will occur on Monday and will see a negative move of an estimated 1.7%. The difficulty is currently at its highest ever, underscoring the overall competitiveness of the Bitcoin network.

The hash rate, meanwhile, saw its absolute peak in mid-August but has since dropped only negligibly — currently at around 122 exahashes per second (EH/s).

On Thursday, a day before the $9,900 dip, Cointelegraph reported on outflows from some major mining pools spiking — BTC was heading to exchanges while the spot price was around $11,500 after a rejection of $12,000 support. 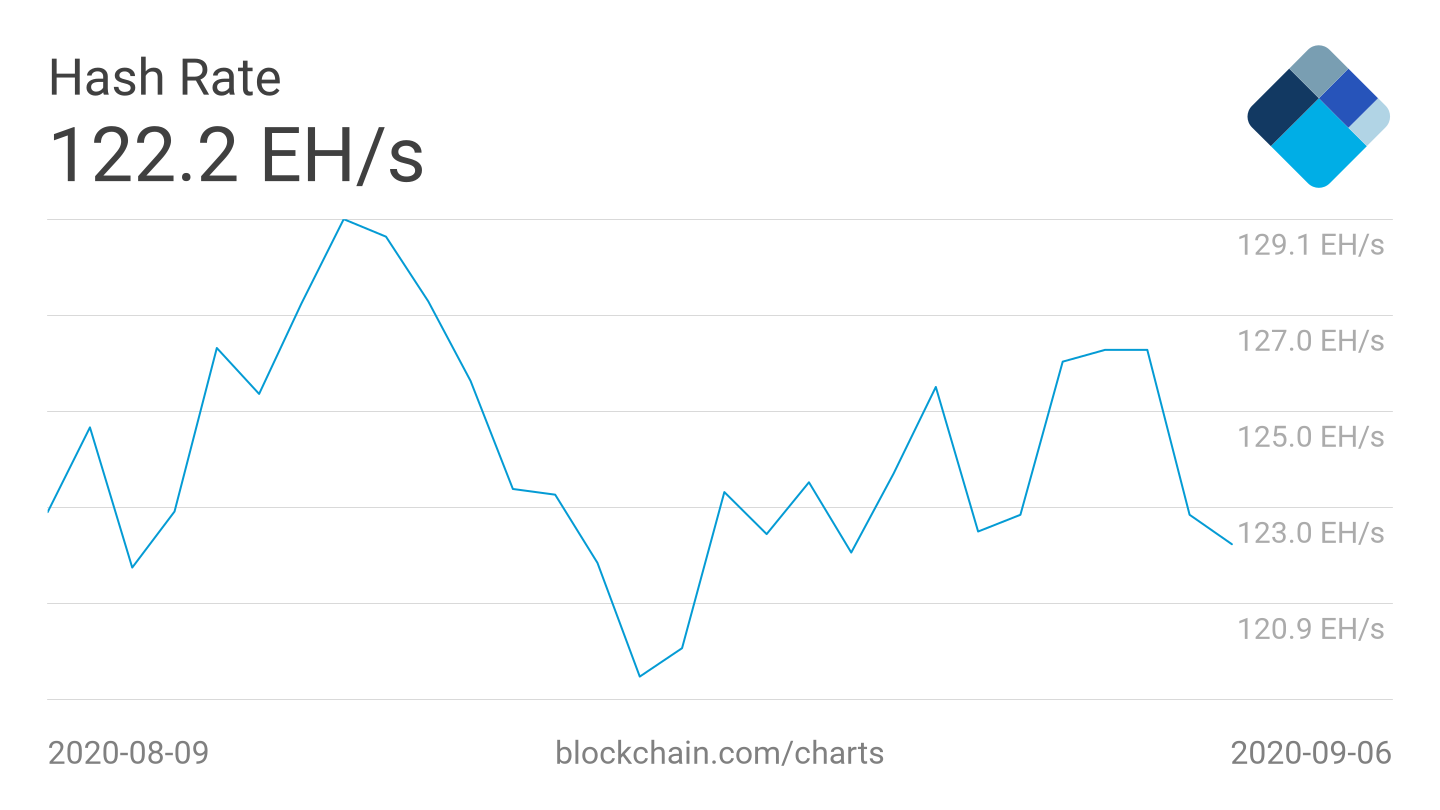 Sentiment turns from greed to fear

In a telling consequence of price action, cryptocurrency market sentiment has dropped to its most “fearful” in almost two months.

According to the latest data from the Crypto Fear & Greed Index, investors have completely changed their outlook versus just one week ago.

The Index takes multiple factors into account to compile a normalized reading of how much fear or greed is circulating from market participants at a given time. The higher the reading, the more likely the market is due for a correction.

Friday saw another shake-up, with “greed” abruptly disappearing to be replaced once again by “fear” with the index measuring 41/100, the lowest levels since July.